Everybody is talking about energy for living and transport...

...but our food choices are responsible for 30% of man-made greenhouse gas emissions. This accounts for more than 2 tons of CO₂ per person per year in US and Europe. We have the potential to reduce food related emissions by at least 50% through smart diet choices. These choices can reduce carbon emissions more than any technological advancement ever will.

With educated, seasonal and regional food choices we can reduce the climate impact by more than 50%. Food is the most efficient way to reduce greenhouse gas emissions and reach the goal of maximum global warming of 2 degrees, set by the Paris Climate Accord.

This is Climate Change

When greenhouse gases like carbon dioxide, methane and nitrous oxide are released into the air, they trap the sun’s heat at the earth. This causes a rise in the earth’s temperature, which leads to climate change. While we’ve seen an average increase of 0.8 degrees since the 19th century, the increase in pace in recent years is unprecedented. In the last three decades the earth’s temperature increased by about 0.2 degrees per decade. As heat is not evenly distributed, northern regions heat up much faster than other regions. Climate change will completely alter how we can inhabit this planet.

The risk of climate change

Extreme weather events like heavy rain, hurricanes, heat waves and droughts are amplified in frequency and severity by climate change, just like mudslides, melting permafrost, acidification of the oceans, the loss of plant and animal species, the spread of disease, yield drops, and increasing water scarcity. Polar ice caps and alpine glaciers are melting at a rapid pace, which causes sea levels to rise. The flooding and the erosion of islands and coastal areas is the result. Climate change is not an event in the future. It’s literally happening right now.

Human activities are responsible for the rise in temperature. Greenhouse gases like carbon dioxide, methane and nitrous oxide are released to the air by the burning of fossil fuels and agricultural practices. Greenhouse gases trap the heat from the sun into the earth’s system. Apart from the temperature going up, also the circulation and distribution of water around the earth is changing as well as many other factors impacting our lives and how we can inhabit this planet.

Global average temperature is increasing at an unprecedented rate. In August 2017 the first tanker crossed the Arctic without an icebreaker. And this is just the tip of the iceberg. The higher we allow the global temperature to rise, the higher the price we pay will be. There are worldwide efforts made to keep the rising temperatures within limits. At the Paris climate conference in 2015 a global agreement was reached to keep global warming below 2 degrees. These efforts are not going to prevent us from any damage. They only aim at keeping the consequences manageable for humankind.

The numbers that add up to global catastrophe

Some context: So far, the rise in the average temperature of the planet to 0.8 degrees Celsius has caused far more damage than most scientists expected. Given these impacts, many scientists have come to think that two degrees is far too lenient a target. NASA scientist James Hansen, the planet's most prominent climatologist, states: "The target that has been talked about in international negotiations for two degrees of warming is actually a prescription for long-term disaster." Some countries will flat-out disappear. The official position of planet Earth at the moment is that we can't raise the temperature more than two degrees Celsius – it's become the bottomest of bottom lines. Two degrees.

Scientists estimate that humans can pour roughly 800 more gigatons of carbon dioxide equivalents into the atmosphere by midcentury and still have some reasonable hope of staying below two degrees. ("Reasonable," in this case, means four chances in five, or somewhat worse odds than playing Russian roulette with a six-shooter.)

Current emissions are at 50 gigatons of CO₂ equivalents a year. Still growing steadily year to year by 2.2%. A back of the envelope calculation gives us a maximum of 16 years to fix the problem.

This already short time frame will shorten significantly if we include the exponentially increasing release of the 1700 gigatons of CO₂ equivalent that are currently stored frozen in over hundred year old ice. A negative feedback loop may happen rapidly, as it will itself accelerate the temperature increase, melt even more ice, and therefore release even more greenhouse gases. It is hard to predict when in the coming years this so called „clathrate gun" is going to fire. But when it happens, it will be too late.

How to set the right climate reduction goal?

The average European and American causes 5.18 kg of CO₂eq a day for his food consumption, or 150 000 kg CO₂eq over his lifetime. With a climate-friendly diet, a person saves a total 100 000 kg CO₂e - an impressive number. Amounting to the same amount of carbon as driving 15.5 times around the globe.

Detailed estimates on a per country basis per person for CO₂ emission, water, land and material consumption are given by the Exiobase studies. Based on the vast collections of trade statistics between countries we know that a Swiss person emits around 14 tons of CO₂ equivalent per year. While the current global average per person is at 7 tons per year. Counting it against the maximum amount of CO₂ that we might capture and sequester, the 2 degree budget of a person is 1 ton of CO₂ by 2050.

Leaving the Swiss with the responsibility and requirement of a 93% reduction. And the average global citizen at a 85% reduction target.

We have summarized sources and details for setting the goal for a food system within environmental limits here.

1/3 of global greenhouse emissions are related to the food supply chain. How and what we eat contributes more to global warming than the world’s shipping and transportation industry. Over 80% of emissions caused by our food supply incur at production, with the most important contributors being deforestation (38%), peat degradation (11%) and direct emissions from agriculture (50%) of which most are related to livestock, fertilizer and manure management and rice production.

The Eaternity Climate Score gives everyone the transparency on the greenhouse gas emissions of food choices. 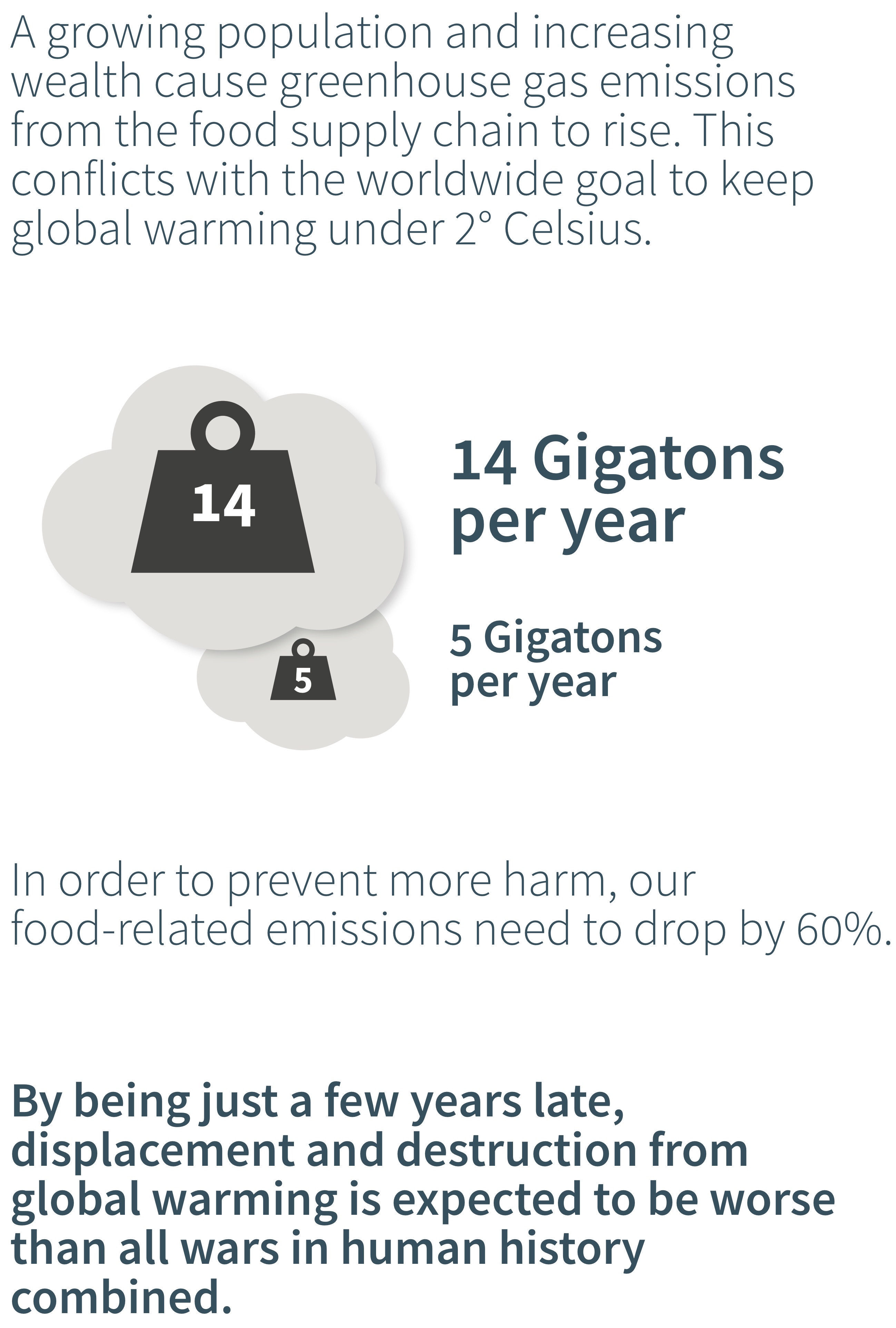 The impact of methane (28 times) and nitrous oxide (265 times) on global warming is stronger than carbon dioxide. Methane is produced by microorganisms in the stomach of cows and sheep. They support the ruminant’s digestion. This process is called enteric fermentation. But methane emissions also originate in rice paddies, where waterlogged soil supports rapid bacteria growth. These bacteria produce methane. Nitrous oxide is related to synthetic and organic fertilizer use and manure management. Fertilizer that is not absorbed by plants is either washed out by rainfall or turned into nitrous oxide by bacteria and released into the atmosphere. Pure CO₂ is emitted when fossil energy is used to produce synthetic fertilizers when machines work the land. Also clear-cutting forests to obtain farm land releases large amounts of CO₂.

Dark predictions: Our food system in 2050

The former US president Barack Obama explains: „If we don’t change course the world bank predicts, that agriculture and land use change will cause 70% of all greenhouse gas emissions by 2050. Emissions from food production are constantly growing and if the world population grows to 9 billion by the mid of this century, it is already time to act now.“View his presentation

Agriculture itself currently faces challenges that are deeply interwoven with climate change. Yields of important staple crops are expected to drop by 20%. Despite short-term gains, deforestation, biodiversity loss, land degradation, and the use of scarce water are further reducing the earth’s capacity to grow enough food. Yet the demand for produce is constantly on the rise. The world’s population is expected to increase by 20% in the coming 30 years. With 40% of the world’s land already covered by agriculture our current food supply is under distress. Each individual has the power to support a sustainable agriculture and currently the world’s population does not yet meet this goal. 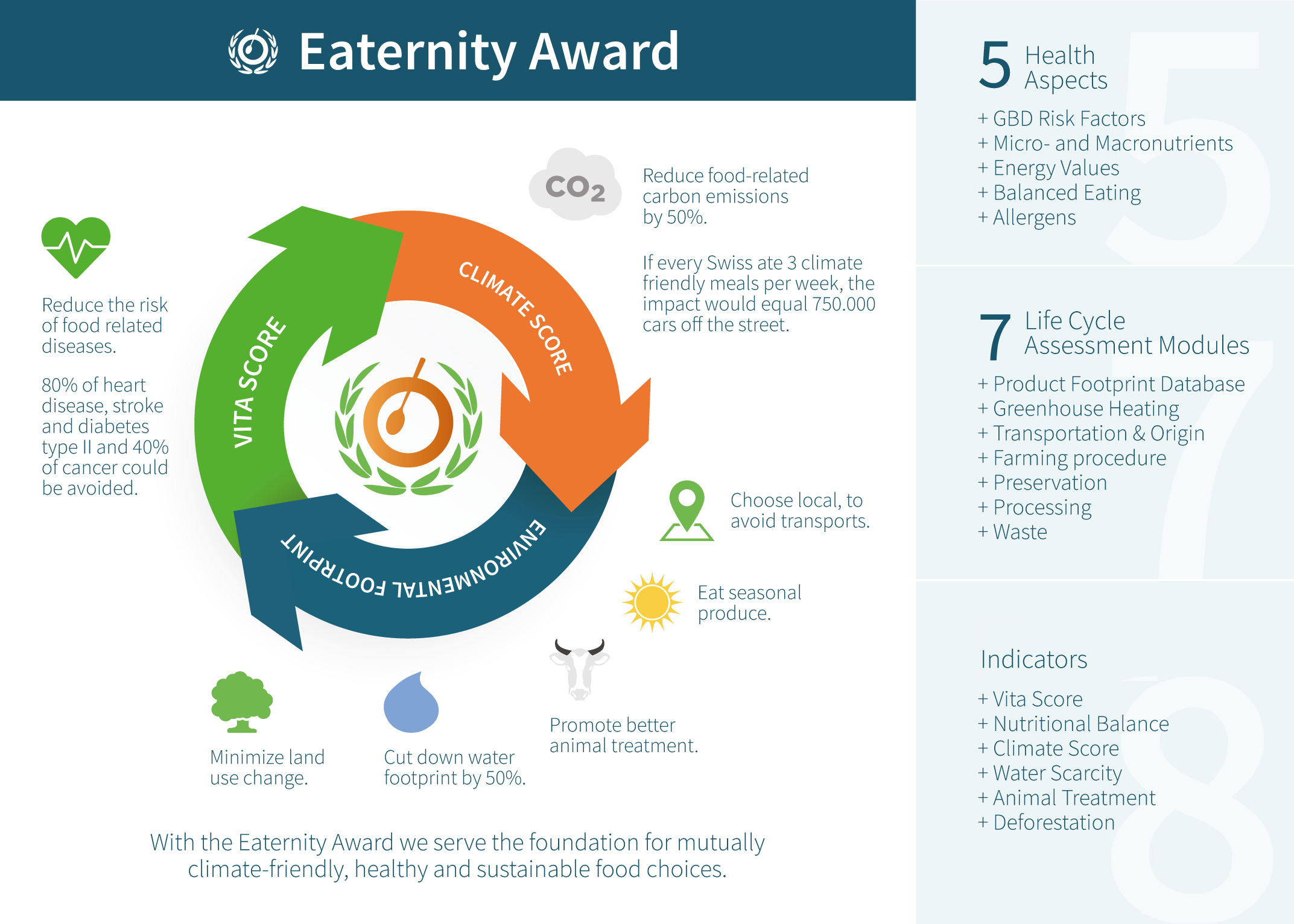 Eaternity's menus are so good, they score awards.

With eating-out on the rise in a modern society, the food service industry is facing a key-role, contributing to a sustainable agriculture and public health. Eaternity provides tools for smart chefs to measure, track and reduce the environmental impact of their restaurants and reduce disease risk along the way. At the push of a button, chefs can access our data and get the information they need to make smart choices. Large caterers and cafeteria operators have already signed on to Eaternity, taking on the challenge of reducing food-related CO₂ emissions and contributing to a healthier society. The best among these food service establishments are awarded the Eaternity Awards.